In the early 1980s an NGO called CODA Community Data was formed in Nottingham to make access to computers and computer training available to community groups and unemployed people in the UK. The impetus for this was to ensure that technology could be used for social change and that no one should be excluded from access to new technology. This project was the first funded voluntary sector project providing these services in the UK, and was extremely innovative at the time.

At the same time that the Nicaragua Solidarity Campaign (NSC) was sending brigades to Nicaragua to support the Sandinista revolution and publicise its achievements, a US based NGO called TecNica sent skilled volunteers on short placements, often working within one of the government ministries. On their return they talked about their experiences to provide a counter to the adverse propaganda around Nicaragua and to persuade people to reject US government policy.

TecNica’s work was so successful and inspiring that, by the late 80s, it was expanding its operations to work in Southern Africa. Through links with the Nicaragua Solidarity Campaign, TecNica also recruited volunteers from the UK.

People from CODA Community Data in Nottingham and from the NSC in London came together in 1989 to form CODA International Training (CIT, as it was originally called). Some of them had been brigade members, or had experience of living and working in Nicaragua. Very soon, close links were established with TecNica. From the beginning, it was envisaged that CODA would work not only in Nicaragua but in other countries like South Africa. 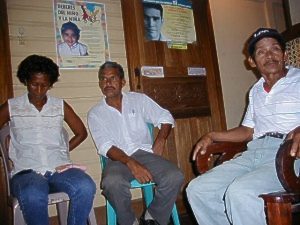 In Nicaragua the situation changed irrevocably in 1990 when the Sandinistas lost the election. The solidarity movement in the US collapsed and, very soon after, TecNica itself wound up its operations. However, people in Nicaragua were adamant that support be continued, and in many ways, with the eyes of the world turning elsewhere, it was more important than ever.

In South Africa fundamental change was taking place at the same time. The situation there was one of hope and exhilaration because change had been achieved without a collapse into violence and civil war.

CODA decided to carry on its activities in both countries and to continue seeking new countries in which to work. The first funding CODA secured was for a project in South Africa with the trade union, COSATU. In Nicaragua, volunteers kept the profile of CODA alive, for example sending English teachers and an economist to work at the universities and in private companies, and women construction workers to a women’s building project. Eventually, in 1994, a project to establish a community health database, working with the Nicaraguan Community Movement (MCN), was funded by the Overseas Development Agency, now DFID.

Over the years, CODA’s focus changed from sending skilled people to work in other countries to supporting people in grassroots groups so they can develop the skills they need to meet their own needs. The portfolio of countries  expanded in Central America, in Southern Africa and further afield into Palestine. And spin-off organisations like Computer Aid International have been successfully established.